Seven Half Diamond Ranch is located in the stunning Thompson-Nicola Valley where the landscape consists of acres of beautiful rolling grasslands, lush patches of aspen trees and countless lakes.

Ranching has been in the O’Connor family for generations; and when they made the decision to move West from Saskatchewan 33 years ago, they knew they had found something special amongst the Aspen trees and acres of rolling hills that would soon become 7 Half Diamond Ranch. There wasn’t much of anything at first besides a lake that no one paid attention to and grassland carved by cow trails. But with a vision in mind, Jim and Heather set about building a place they could share with others. A private retreat that would offer cozy cabins, trail riding, cross country skiing or just plain old rest and relaxation for those that need it. Jim and Heather worked tirelessly building guest cabins, bunkhouses and a genuine cowboy saloon where overnight guests soon become friends. Oh, and that lake no one paid attention to??? It’s called Batstone Lake and Seven Half Diamond Ranch will be hosting the North American loche style fly fishing championships this Fall. Jim worked hard to develop one of the most sought-after catch/release venues and Batstone Lake has caught the attention of many fly fishermen. Having already hosted the 2016 Canadian National Fly Fishing Championship, the 2018 North American Loche-Style Championship – 2019 North American Loche-Style Championship, the cabins are booked with many new and repeat guests who have become addicted to the sport. 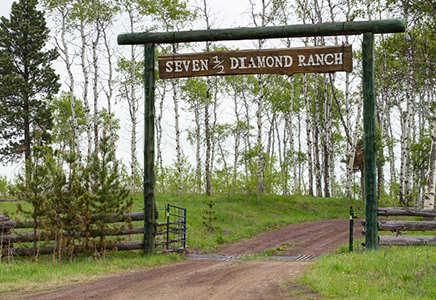 The Ranch will be the Venue for the 2022 Canadian National Fly Fishing Championship.